Lionesses on the Prowl in “Train Trouble”

Welcome to Lionesses on the Prowl, the continuing saga of Izzy and Tristy (Dezi and Christy’s flat traveling cats). If you haven’t met Izzy and Tristy, you can read about them here.

A couple of weeks ago, Izzy and I headed out to visit our Cat Scout friend Shoko and her fursib Kali, the Canadian Cats. It was a bit of a challenging trip but we had a blast in spite of it.

It was late when Izzy and I boarded the train in Sacramento, so we quickly found our room but didn’t take time to unpack. We wanted to make it to the dining car in time for a late dinner. Being the proper, reserved ladies we are, we had booked a bedroom with a private potty box. The bedrooms are small but more than adequate for a couple of mini-lionesses. 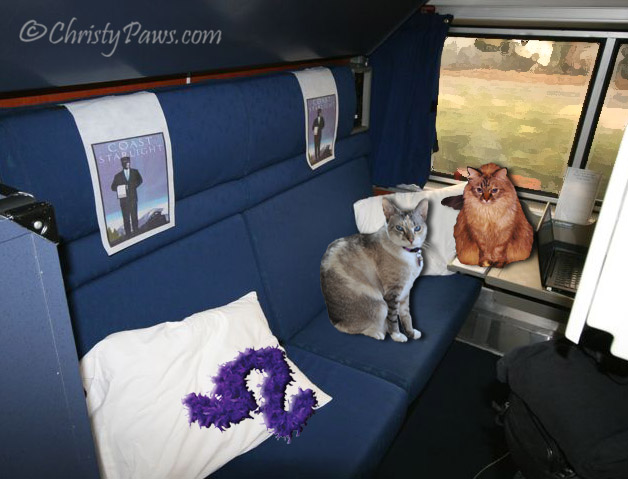 Since it was so late, we had to have dinner in the dining car. You can eat in the dining car or have your meals delivered to your room when you order ahead. We thought we might do that for dinner the second night. 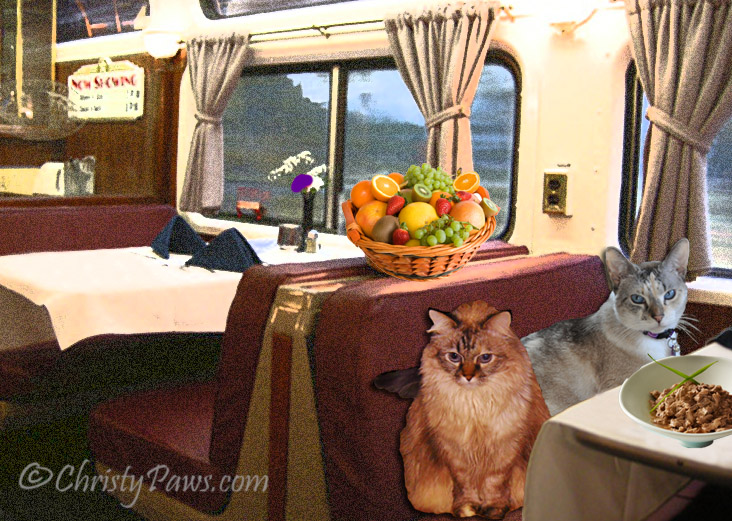 After we had a scrumptious dinner in the dining car, we turned in for the night. While we were mewing away with the girl talk, we felt the train slow down and stop. And it just sat there. And sat there. Eventually, we learned that one of the engines had died. The one that was still working wasn’t strong enough to pull the train over the mountains by itself so we had to wait for them to bring another train to tow us to where they could give us a replacement engine. We passed the time like any good kitty would — we slept. A few hours later, we were on our way again, under tow. We got a new engine at the next depot.

Now, you might think that was enough excitement for one trip, but in the wee hours of the morning, the train came to a halt once again. This time, it was not a nice, slow stop. We were rudely jolted around and we could hear the screeching of the wheels for what seemed like forever. Izzy and I looked at each other and ducked under the table. We stayed there for a good long while until the conductor came around telling passengers what had happened. There was a COW on the tracks! We never heard if the train actually hit the cow but we wondered if we would have steak for dinner that night.

Once we were back on our way, there was a horrible clatter and continual bump, bump, bump in our bedroom. Now, you know kitties can sleep almost anywhere but this was a little annoying. We learned that because the train had come to such a sudden stop, it had made a flat spot on the metal wheels on one of the cars — OURS — and that at the next depot, they had to take our car off the train.

We spent the rest of the day alternately napping and enjoying the spectacular views from the parlor car. Later in the afternoon there was a wine and cheese party. We had some appetizers and refreshing nip tea. 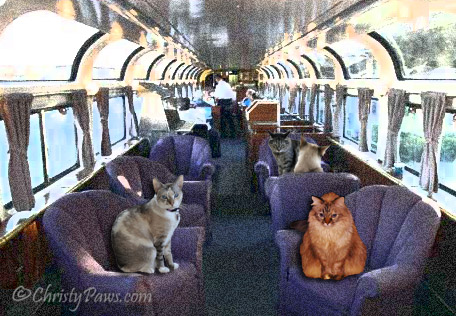 When we got to the depot where they took our car off the train, we learned they didn’t have any bedrooms available in the remaining cars, and we had to share an area with some other cats. Under other circumstances, this might have upset us, but these were the coolest cats ever. We partied late into the night until we arrived in Seattle, many more than 24 hours from the start!

From Seattle, we had a four hour train ride to Vancouver. From there, we took a bus for the remaining 12 hours of the trip. I think we must have slept the whole way once we left Seattle because I don’t remember another thing until we got to Shoko and Kali’s.

To read about our time with The Canadian Cats, click here.

That’s all from me for now. Visit Dezi’s blog next Thursday for the next installment of our saga from Izzy. I’ll see you again in a couple of weeks.

17 Responses to Lionesses on the Prowl in “Train Trouble”